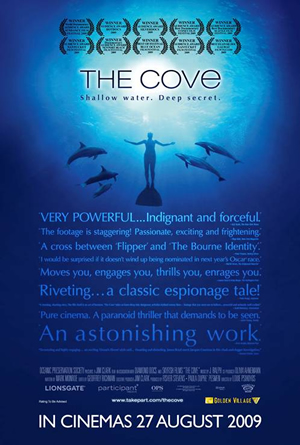 The Cove is a 2009 documentary film directed by Louie Psihoyos which analyzes and questions dolphin hunting practices in Japan. It was awarded the Oscar for Best Documentary Feature in 2010. The film is a call to action to halt mass dolphin kills and captures, change Japanese fishing practices, and to inform and educate the public about captivity and the risks, and increasing hazard, of mercury poisoning from dolphin meat. The film is told from an ocean conservationist's point of view. The film highlights the fact that the number of dolphins killed in the Taiji dolphin drive hunt is several times greater than the number of whales killed in the Antarctic, and asserts that 23,000 dolphins and porpoises are killed in Japan every year by the country's whaling industry. The migrating dolphins are herded into a cove where they are netted off. The young and pretty are then captured to be sold to the oceanariums and dolphinariums around the world; the rest are brutally slaughtered. The film argues that dolphin hunting as practiced in Japan is unnecessary and cruel.

Since the film's release, The Cove has drawn controversy over neutrality, secret filming, and its portrayal of the Japanese people.

The documentary won the U.S. Audience Award at the 25th annual Sundance Film Festival in January 2009. It was selected out of the 879 submissions in the category.